OI NIKE – ASK A PROPER TRAINER WHO CARES TO HELP NEXT TIME! 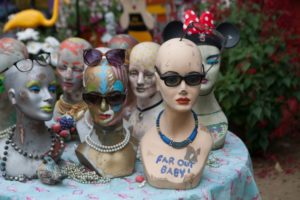 *the vicious opinions, such as

‘The new mannequin is obese, and she is not readying herself for a run in her shiny Nike gear. She cannot run. She is, more likely, pre-diabetic and on her way to a hip replacement. What terrible cynicism is this on the part of #Nike?’ – Tanya Gold

(Who says she’s getting ready to run Tanya)

(Great point KaNe, we have to eat otherwise we die.)

I think it could be a tool to help people be encouraged to help lose weight. I don’t think it should be used to sell plus sized clothing because this will encourage people the opposite way. I feel that some stores are going to start using them for those reasons.

(Have you considered changing where you shop in Ken)

Regardless of being body positive, it is unhealthy to be overweight. We want to promote healthy image surely? – Ed Scott @EdScottLondon

(It would be great Ed if you could define a healthy image, but isn’t promoting a healthy lifestyle and the option to move a better angle)

(Err…No, if that were true then people who drive more pay more road tax or people who talk more shit than others pay more council tax)

Surely that’s a health and safety hazard? What if it falls over and crushes a kid? – RStoddard @RansomStoddard1

(You have a very dark miserable place in your head, do you worry every time you are walking with scissors that you may fall over and stab someone?)

*pat on the back comments that Nike finally produce clothing for everyone (or as I like to call them, being seen to say something that you think sounds right but means nothing comments), such as

I think that they did it so that someone out there perhaps in their first few weeks or months of big compositional change journey can feel slightly better about themselves and perhaps for once in their life fit in.

Someone of that mannequin’s size somewhere could be walking into a gym in their Nike outfit whether it be in the middle or beginning of their big journey. James Smith personal trainer

(Some trainers use big words to give themselves higher status such as big compositional change journey or simply making a change.

I think you should mind your own business why women buy clothes…James.)

But the reality is that both are important

Obesity does lead to higher mortality rates, but fitness can cushion that effect – Jack Morse @bjackmorse

(we all die, some from not having any weight at all)

(or is it the confidence to change that matters)

(true but not the only 2 that are important)

(there isn’t anything that cushions death)

So hold on Nike put “training ware” or “activewear” on plus size mannequin Like trying to put a fire out with petrol ?? #NikePlusSize   (No Josh you are mistaking selling clothes to arson)

Don’t get me wrong if you’re about changing go for it, we don’t need to promote an unhealthy lifestyle – Josh “JDIM” Taylor @JDiM8  (Yet you say stuff like this and we let you have twitter, I wouldn’t trust you with crayons)

*taken as a norm for including everyone who wants to be involved in fitness, such as

If you’re talking about the model size I think you might be part of the problem or a victim of the people making you think there is a problem – John Hardy, Faster Global, fitness education

(I agree, it’s easy to get caught in the common dialogue but can you step back and see the big picture)

Nike could have done this better. They knew that it would create a media frenzy, used that free marketing as leverage in column inches or social media likes…that’s possibly how they measure things nowadays.

Sarah Hannah, Nike’s general manager and vice president for women in Europe, the Middle East and Africa, said in a statement “with incredible momentum in women’s sport right now, the redesigned space [at Nike Town, London] is just another demonstration of Nike’s commitment to inspiring and serving the female athlete.

Nike, of course, Nike gained it was their promotion.  But they also got the added extra of all the other voices and their opinions referencing Nike in every post. There is no such thing as a bad advert because even if it is bad everyone is talking about it so it’s gaining publicity and traction. Nike gained more than they possibly expected, and they are a business and that will most likely end up with more sales and profit for shareholders.

Social media shouters which include influencers, brand ambassadors and fitness professionals. Every single one of these gained because they were able to give their opinion loud and clear. Influencers, brand ambassadors and fitness professionals all want to be seen and showing their followers which direction they should be going in, hyping themselves up to be a guru. Fitness professionals can be the most opinionated about body shapes and lifestyle, yet they are in the industry that is inclusive to everyone. Everyone includes not just those overweight, but also underweight, post-trauma, post-injury, during and post-illness, during and through treatment, amputees…….and everyone else.  But the social media shouters feel good because they got to shout about fat people.

The women who the clothing was aimed at.  Because once again they are being spotlighted and either being told how bad they are or being patronised, that’s enough to support the lifestyle they are being berated for.

Watching this unfold made me feel a bit sick, we will never get away from opinion and it’s good to have opinions but in this scenario, it could have been played out, so the right people gained the most from it.  Read on… 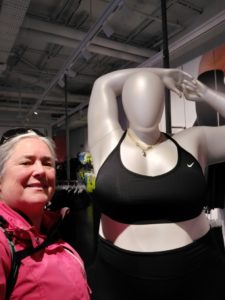 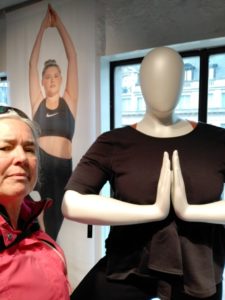 Bad choice of clothes for diving

I went to look at the mannequins and take some selfies……

Here are me and the girls!

Number 1: Where is the plus size male mannequin?!!  Not only is this a plus size issue the narrative is directly aimed at women because let’s face it, it’s because they are easy targets and it’s been happening for years, why stray away from the norm…. ugh I get the essence of no backbone at Nike. But knowing the impact this promotion was going to create there wouldn’t be any point in having male mannequins because that would dilute the experience. (Or even given it a beer and then it would have been funny or celebrated)

Number 2: Having seen the layout of the store I can see how the photographer had tried to take the shots to get the most perspective, under the direction of Nike of course. By having the smaller mannequins in the background, it boosted the size of the other mannequins due to the forced perspective.  I have no doubt this was all a deliberate manoeuvre to gain more traction on social media, which resulted in more comments and vitriol.

Number 3: This really wasn’t about the introduction of larger sizes in some of their ranges, this was a full-on product shot. Their other ranges on the smaller mannequins behind, the double whammy product shot, because remember this has nothing to do with the sensitivities of the subject matter, it’s about sales.

This makes me feel sick, physically sick.  It’s opening the door to bullying. Putting someone, albeit a mannequin, in this case, centre allowing the full blow of insults and hollow comments. Bullying the silent killer supported by Nike. Shame on you Nike.

This is how I think Nike could have made a better job of showing off their new designs.

My Number 1: Have male plus-size mannequins around the store too.  If they had launched on the same day to have the same impact it would have included everyone who lives in this size range, not just women. Fitness is for everyone, should be available to everyone in a manner that is comfortable and encourages their chosen exercise.

Why didn’t they do it: because it wouldn’t have the same impact, it would have been diluted. The majority of the posts I found that were not fully embracing of the mannequins came from men. There are fewer comments directed at overweight men as a category, being overweight as a general thing gets a lot of comments and opinions, but overweight women receive so much more and the nastiness behind them is disgusting.  But I guess if you’re Nike you’re not looking at the content of the comments when you’re counting stats and analytics.

Why didn’t they do it: because that would not have carried as much impact and therefore not have received as many comments, opinions, hashtags and free marketing.  It’s business right, it’s about selling as much as possible, who cares if they condemn overweight women to more abuse, that’s okay.  No, it’s not okay, it’s time we left that behaviour pattern behind.

My Number 3: Put all the mannequins in the same outfit or range.  If by adding plus-size mannequins Nike wanted to show that they welcomed plus size women into their world as equal why didn’t they show them as equal? I know Nike has a range of products, but this article/blog is not about their ranges it is about the plus size mannequins in their store and how they promoted the range.

Why didn’t they do it: because they wanted to get as much leverage as possible from one photo shoot, get as many products in as possible. Nike is a $32.4 billion (approx.) and can afford a photo shoot dedicated to their plus size range but it didn’t get to be that wealthy without keeping a tight rein on their spending so more than one photoshoot wouldn’t be ‘value for money’. Nike could have had two photo shoots, but Nike chose not to because doing the right thing doesn’t have as much value as profit and shareholders debentures

Those are my thoughts on how this launch and promotion could have been played out better and more thoughtfully.

And this is my thought process behind those changes:

Nike, you are a multibillion-dollar business and you are a powerful business, you can steer the market with your brand ambassadors wearing your clothing and you can be as hard as you like with your marketing as you hold a fair chunk of the market.

You knew that this promotion would have this effect, so many opinions and comments about the people who wear this size and always talking about your brand. A long time ago a friend said to me there’s no such thing as bad advertising because at least they are talking about your product, especially true for the big companies.

You can choose whether to direct your marketing as you did OR to make it supportive of all body shapes and design your marketing to discourage the snaring negativity but to promote health, fitness, wellbeing and lifestyle for all.

Business is not about social media likes but supporting your customer, the person who buys your products, in the best way you can.

This site uses Akismet to reduce spam. Learn how your comment data is processed.

We use cookies to ensure that we give you the best experience on our website. If you continue to use this site we will assume that you are happy with it.OkRead More